Cable head type KGTs-10 is used for outside assembling for terminating of three- wire cables with insulation made of impregnated paper with copper or aluminum conductors with cross sections up to 240 mm2, at voltage up to 10 kV. The cable head consists of the following parts

Detailed procedure for assembling is described in the assembly instructions which is delivered with each order. When assembling is finalized, the cable head is filled with oil mass through the opening of the middle insulator cap which is part of assembling equipment. 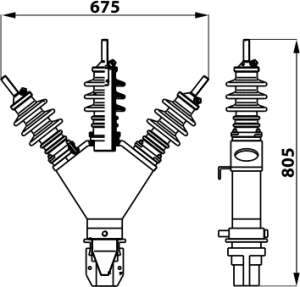 GEAR FOR ANCHORING OF LV ABC