For a brighter future with Serbian lamps made to European standards. 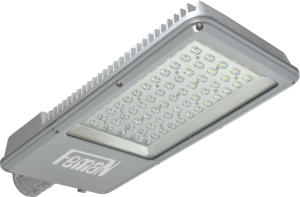 LED lamps used for lighting streets, parks, squares, factory, and all other places where good lighting is required. It consists of a housing made of aluminum alloy casted under pressure, a protector of tempered glass, aluminum mirror, diode lamp with lenses on the diods and three-layer silicon gaskets. LED lamp with a panel works on the utilization of solar energy.

Solar panel in combination with LED lamp is durable and cost effective solution in many situations. The biggest advantage is the possibility of lighting the roads, parks, roads where there is no possibility of bringing electric power.

Advantages: The biggest advantage of LED lamps is the possibility of uniform rectangular light propagation with the same intensity under the lights and in the end points of the illuminated surface. This effect is achieved by using specially made lenses that direct light. Energy saving is the life of LED which is greater than 50,000 working hours, which is 5 to 10 times more than sodium and mercury lamps. LED diodes have high efficiency, unlike other sources of light whose intensity drop during operation up to 50% ,sodium lamps after 30,000 hours, while the LED’s intensity drop 30%, after 70,000 hours .