Used for connecting tap-off and connecting Al cables to uninsulated aerial wires, in accordance with JUS.N.F4.106. In addition to good mechanical features, it has exceptionally good electrical characteristics. It is made of electrotechnical aluminum according to DIN 40501.    FEMAN’s “UNIMAX” clamp is made by casting under pressure and the channels are made with cross grooves which, when tightened, destroy aluminum-oxide on the surface of the cable, creating better electrical contact. At the same time, this innovation also improves the clamp’s mechanical characteristics. The quality and reliability of the connection has been greatly improved with the introduction of the cross grooves along the length of the channels. Until now, unimax clamps were made of Al profile without grooves, and the layer of aluminum oxide caused greater transient resistance between the clamp and the cable, causing poor tap-off wire contact. The two parts of this clamp are held together by two bolts which are impressed into the bridge of the clamp, allowing for easier single wrench assembly. 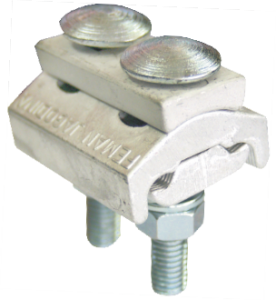 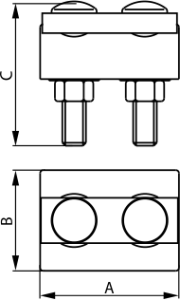 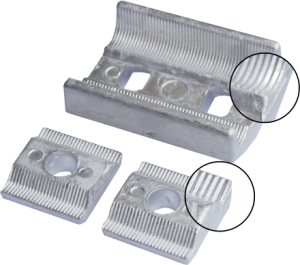